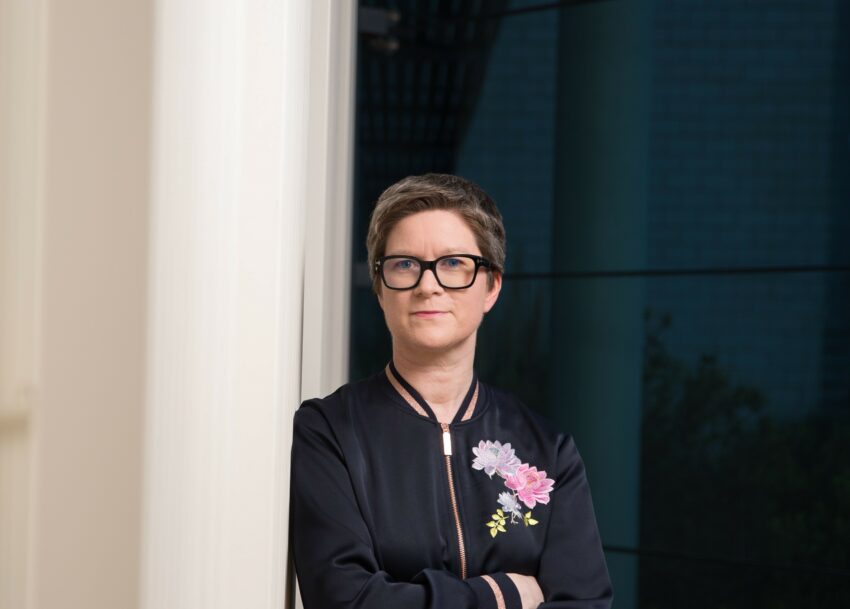 Marie O'Riordan (pictured) is autistic, LGBT+ and the PR lead at EML.

Forget what you know about autism, says Marie O’Riordan, Global Director of Public Relations at payment solutions firm EML, who’s on a mission to wake organisations up about autistic talent.

As a youth, O’Riordan could memorise entire encyclopedias at school and gave her science teachers suggestions about the latest research: “When you deal with people on the spectrum, it’s not unusual for them to have an accelerated timeline, and you tend to find they get a lot done early in life compared to other kids.”

O’Riordan falls into the category of ‘doing more’; she was a working journalist by her teens and was seen on Irish national television by her school peers; by fifteen, she had won an award for a short film.

“I think the most empowering thing is being authentic and speaking your truth; it was never an option for me to be in the closet of being LGBT+ or autistic. Were there difficulties at times over the years? Absolutely. But for decades now, I can say I’ve never had an issue being gay or autistic in the workplace; it’s now embraced- people are curious.”

Autism in the workplace – skills and misconceptions

O’Riordan believes her condition suits her current role where she “can go into forensic detail.” She embraces her “lack of filter”, which she considers an advantage in public relations where it “helps to be completely transparent.”

She also speaks to businesses about hiring autistic talent, where she believes the employment gap, (new data from the ONS shows that just 22% of autistic adults are in employment) has made people question their work capabilities when it’s mostly bias and lack of knowledge that sits behind this statistic.

For autistic people in the workplace, O’Riordan says the language used to describe them has changed: “So I’ve gone from being called ‘Rain Man’ to, ‘she’s a spectrum baby.’ So even the language patterns have become more positive over the decades.”

In her conversations with “neurotypicals” (people who don’t have learning difficulties such as autism spectrum disorder, ADHD, or conditions like dyspraxia), she’s discovered many misconceptions about autistic people, including they are “hard work and need hand-holding and an awful lot of more resources which is rubbish.”

“I work the same as everyone else,” she continues. “I use the same workspaces, so it’s the misconception about accommodations, but that’s not to take away from the people who may require accommodations, and that depends on where they are on the spectrum.”

Another misconception she’s seen made about autistic people from HR teams is the assumption they are anti-social: “I’m an extreme people person, all of my senses are locked in 100%, and that really helps in my writing and engaging with people.

“People assume that people with autism don’t have empathy but we’re human, we’re hugely empathetic and I’m expressive. Not everyone with autism is usually expressive but that’s me.”

An ability to zone into work and concentrate for hours is another positive by-product of O’Riordan’s condition: “There’s an energy that I bring to my life that people can misinterpret,” she says. “I can sit in the same spot and diligently do my forensic work for more hours than I care to be honest about.”

But has she found that other autistic professionals have hidden their condition due to these misconceptions?

“There is this perception that you come out as gay or autistic once, but the reality is you come out every day for the rest of your life because you’re constantly meeting new people. I have many colleagues who choose to hide their diagnosis because they’re afraid of the reactions.”

O’Riordan has become something of a role model for colleagues with autistic loved ones and has held a series of dinners to enable informal discussions: “One of the recurring themes has been the partners of colleagues asking, ‘can my son have a normal life? Can he get employed? Can my daughter get employed’? It’s heart-wrenching the fear they have, and they get more terrified as their child gets older that those opportunities are going to diminish, whereas, in my experience, it’s actually getting better.”

O’Riordan says the way organisations support neurodiverse people today is like “night and day”, where she thinks the bigger firms have responded best: “I saw a huge leap in 2017 when Harvard University released a paper saying that hiring neurodiverse employees is your competitive advantage. There’s been a massive surge in company and HR understanding across the board in recent years.”

While conversations might be opening up about neurodiversity, organisations need to engage more with autistic candidates, specifically, if the group’s employment gap is to close: “If they have any subconscious hesitancy they really should speak with people on the spectrum, because how can you open up HR policies when the autistic community isn’t included? They must listen and really open their minds to what we’re sharing. Also, you might be on the brink of not hiring the one person that could propel your company forward by lightyears.”

How EML does D&I

She says D&I at EML “is a given” where personal differences are embraced through their company values of “awesomeness and openness”, but what policies have really impressed her? “I’ve been most impressed by the gender parity we have, so we’re now at 50:50 of female and male employees.”

When it comes to LGBT+ inclusion, O’Riordan says acknowledging the community during Pride month via internal emails and on social media is a good thing, but at EML, volunteering for community causes has been the most impactful experience, where staff are allowed to take days out to work for social causes they care about.

“I think that’s been huge,” says O’Riordan. “This is the first time in my career I’ve had that opportunity, and there’s a depth to it. When you accumulate all of those volunteer days, how many 1000s of hours is that going to be? So I think we can make a change for good.”

In her role as an advocate for autistic talent, O’Riordan often talks to companies about how to make the recruitment process fairer: “In my life, I have struggled with putting together my CV because it’s like a book. When you have a book as a resume, you don’t know where to start.”

Being a neurodiverse positive recruiter

However EML was clearly not taken aback by her unorthodox CV: “Before 2017, I hadn’t refreshed my resume in 13 years. So it was like CV graffiti, and they still hired me.”

She adds that what’s probably needed in recruitment is more of an open attitude towards different types of CVs to account for those with neurodiverse conditions. She says she would have been “doomed” professionally if the likes of EML had discredited her way of presenting her career on paper.

O’Riordan’s predisposition to forensic detail has aided her in her journalism and PR career, but they have made job interviews challenging: “I need to condense myself in the job interview process to figure out very quickly that they just need a little bit of detail,” she says.

“My mind is going at 1,000 miles an hour, they ask me a question, and I will immediately interpret that question in 15 different ways and all the possible 15 scenarios.”

Evidently, open-ended questions during interviews can be daunting for those on the spectrum; and considering O’Riordan didn’t mention her autism during previous job interviews as she didn’t want to be “pigeonholed”, interviewers should be mindful that any candidate they meet could have learning difficulties and should tailor concise and specific questions for them.

Asking these sorts of questions could improve the interview experience for all candidates regardless, as, let’s face it, any nervous interviewee can go off on a tangent if a question is too vague.

Considering O’Riordan’s swift upward trajectory through EML (she joined as a Senior Marketing Manager in 2017 and had two promotions before her new role as Global Director of Public Relations this year), more organisations should be open to diverse application styles. By enforcing a one-size-fits-all CV rule or interview structure, they could be shutting out neurodiverse talent like O’Riordan who need the flexibility and understanding to work and present themselves in a way that helps them shine.