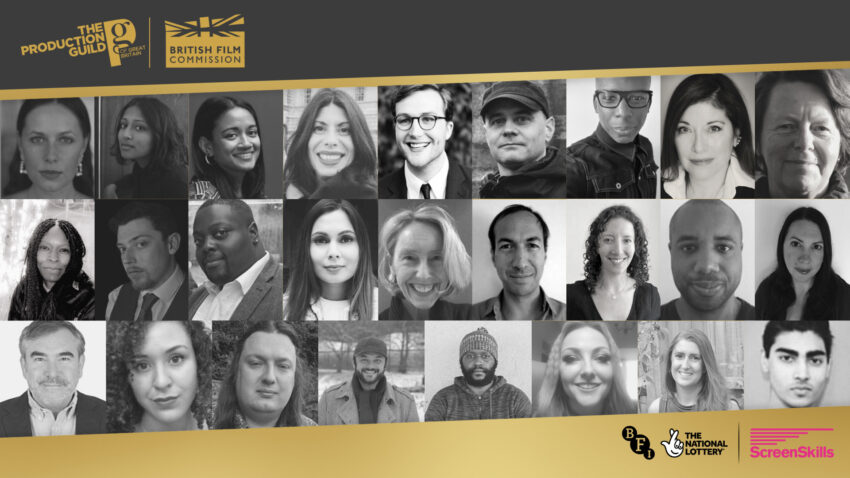 The scheme's 15 mentees and their mentors have been announced.

The Production Guild of Great Britain (PGGB), in partnership with the British Film Commission, has announced the participants for its first Diversity and Inclusion Mentor Scheme, which has matched 15 mentees with experienced industry mentors working in UK film and high-end TV production.

PGGB’s Diversity and Inclusion Mentor Scheme is designed to help underrepresented talent at entry, early, and experienced levels reach the next level of their career in their chosen field.

Mentors have been selected from PGGB’s membership talent pool and have all worked in film and high-end TV production at a senior level.

PGGB’s new mentorship scheme is part of its Mission Inclusion programme (#MI21) delivered in partnership with the British Film Commission and designed by PGGB’s Diversity and Inclusion Action Group to empower production personnel to expand their networks and ensure they are hiring diverse production teams.

#MI21 also includes a schedule of masterclasses with leading diverse talent and campaigners to widen awareness of how to embed diversity and inclusion principles in production teams. 2021 events to date have included the ‘Disability Allyship in the Film and TV Industry’ event sponsored by Amazon Prime Video, featuring Tommy Jessop (Line of Duty), the first actor with Down Syndrome to start in a prime-time BBC drama.

The 15 mentees and their respective mentors are:

Professor Lyndsay Duthie, PGGB CEO, said: “Following an exceptionally strong response to our call for mentee and mentor applicants earlier this year, I’m so pleased to see our Mentor Scheme move out of the starting blocks with 15 talented individuals matched to some of the most experienced senior production professionals working in the UK today. This first cohort spans talent of differing ages at various points in their careers, all looking to progress to the next level. For the next six months, they will receive dedicated regular contact time with their mentors, who will help them hone their goals, overcome challenges and implement effective steps to help them progress along their chosen path.”

Samantha Perahia, Head of Production UK, British Film Commission, said: “We’re delighted to partner with PGGB to help improve diversity and inclusion behind the camera. Access to experienced crew is a vital component of any successful stage space development. This kind of initiative, which focuses on diversity and inclusion both at the new entrant level and through Continuing Professional Development, is essential in ensuring that our world-class crew base continues to develop and grow. I can’t wait to see what the talented individuals chosen for this scheme do next.”

Jivan Mann, PGGB’s Diversity and Inclusion Action Group Producer, said: “This is a fantastic opportunity for both mentors and mentees to really help the future leaders of today change the landscape of production for tomorrow. We kicked off at the end of July with a sound discussion around the benefits of mentoring, experiences of privilege, and career progression, followed by training on how to get the best out of mentoring in conjunction with ScreenSkills. We can’t wait to check in with our mentees soon to see how they are developing as the scheme progresses.”

Mentee Paul Reilly said: “I have experience at Production Assistant level and am hoping to become a successful Production Coordinator and then Manager, in the future. I have high-functioning Asperger’s Syndrome, which has some useful qualities for production, from my outstanding attention to detail to high determination. Despite this, I’ve found getting work to progress my career difficult. I managed to get a two-week freelance job as a Production Assistant in February 2020, but when the pandemic hit, the job market became harder to break into, so I felt I was back to square one. I am determined to succeed in a job that I love and help produce high-quality content.”