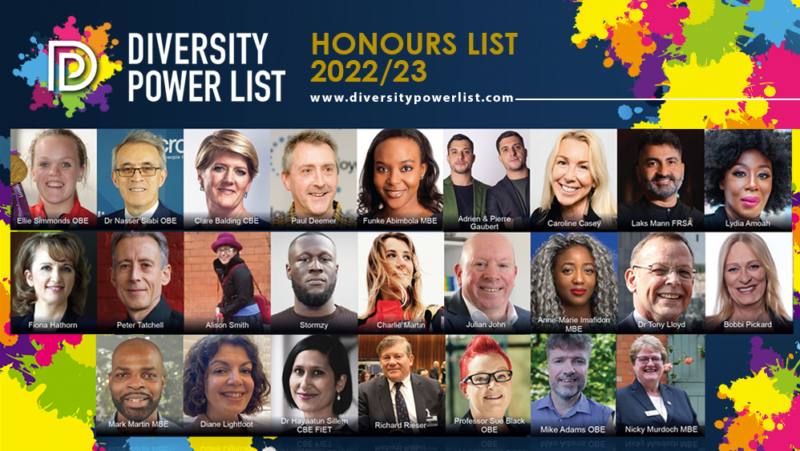 The list includes people from all walks of life.

Fifty champions of diversity and inclusion have been named in the first-ever Diversity Power List. Paul Sesay, CEO of Inclusive Companies, compiled it to highlight people making a tremendous difference in the lives of others.

The list includes people from all walks of life showing outstanding bravery and dedication to promoting diversity and inclusion in their communities and the wider world.

Paul Sesay revealed the Diversity Power List at the 2022 Inclusive Awards on December 1. He says: “It brings together the most innovative and inspirational ‘diversity conscious’ people in the UK today. Whether in the public eye or less high profile, all are to be recognised for championing diversity, be it race, disability, age, LGBTQ+ or gender.”

The people on the list across every sector of society. Here are just a few:

Callum Daniel became the CEO of the company he founded, iCodeRobots, at the age of just seven. He partnered with other tech firms to fuel his desire to provide children from disadvantaged backgrounds with coding training.

Poppy Jarman OBE has become a global voice for mental health in the workplace.  A national policymaker, she works tirelessly to create a positive culture by striving to break the stigma attached to mental health.

And Professor Amanda Kirby, a qualified GP and Professor at both the University of South Wales and Cardiff University, has been passionate about improving the lives of neurodiverse people. She sits as the chair of the ADHD Foundation and, in 2021, successfully published a book ‘Neurodiversity at Work, Drive Innovation, Performance and Productivity with a Neurodiverse Workforce’.

Rodney Hinds is a well-recognised name within diversity work. As a long-standing sports editor on The Voice, one of the UK’s leading Black newspapers, and Co-founder of the Football Black List, Rodney has spent a great many years supporting the Black community.

Meanwhile, singer, rapper, songwriter and double BRIT winner Stormzy is a passionate campaigner for black students in education with his Stormzy Scholarship. It gives financial support to Black British students at Cambridge University throughout their degrees.  Finally, fresh from the dance floor where she wowed the crowds, eight times medal-winning paralympic swimmer Ellie Simmonds OBE is simply inspirational in showing how a disability does not restrict a person from achieving their goals.