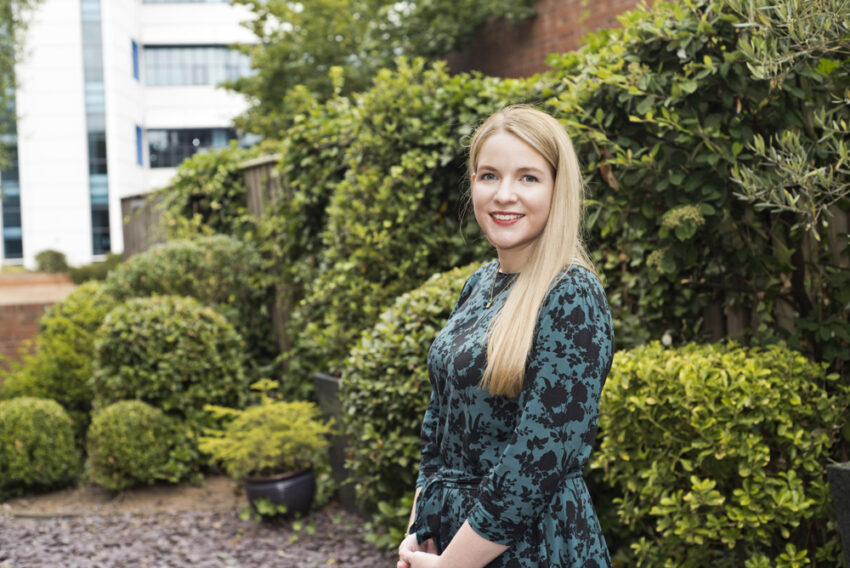 Wieland is a recent winner at the Inspirational Women in Law Awards 2021.

We think of a typical lawyer as being from a middle or upper-class background as law is a costly industry to enter, requiring the completion of a professional law degree (LLB) following undergraduate study.

Considering the expense involved in becoming one, it’s unsurprising that many lawyers are from socially privileged backgrounds. In fact, 22% are privately educated.

While gender diversity isn’t bad, with women accounting for around 48% of the workforce according to the Solicitors Regulation Authority, those with disabilities make up just 3%; and it’s this group and the less socially privileged that Lynette Wieland, an Associate at Browne Jacobson, is determined to help.

Diversifying the profile of “lawyer”

Wieland, who was recently named Champion of the Year at the Inspirational Women in Law Awards 2021, is not only a solicitor but a diversity advocate, proud neurodivergent, and ambassador for social mobility in a sector that can feel demographically uniform. “I think our idea of what a solicitor is or should be is married to old ideas such as someone that should have gravitas in a room and be a self-promoter,” she says, adding that these soft skills are often learned for those from less represented backgrounds.

While many of Wieland’s peers took the chronological route to law via higher education institutions, she did things differently, “I didn’t do A-Levels, and at age 16, I left school and went to do an apprenticeship.”

While the apprenticeship wasn’t related to law, she said it gave her transferable skills, including how to behave in a professional environment, including email decorum which she agrees young people don’t get taught enough about in school. Whilst working as an apprentice, she decided to take the plunge to do a part-time access course to secure her place on an undergraduate degree at the University of York.

She adds that unless law firms progress talent who entered law from less traditional routes, such as via apprenticeships, we won’t see enough role models from varied social backgrounds.

Wieland warns this could also harm diversity hiring ambitions due to affinity bias, where people are likely to hire people similar to themselves. If only socially privileged lawyers remain on hiring panels, they may overlook the unique insights, skills, and experience of candidates from different backgrounds.

She also believes the legal sector has work to do on neurodiverse inclusion. She says this group can miss out on career progression opportunities due to the struggles between balancing the expectations that a law firm may have of them, such as targets, alongside unbillable parts of the role like networking and business development.

“On top of what is already a very demanding role, it can be quite a challenge for neurodiverse lawyers, who may need more time to complete tasks and are working with increased cognitive effort,” she says.

“We can be so driven when adopting a specialism or passion, and firms must make the most out of that, rather than encouraging neurodivergent lawyers to spread themselves thinly,” she adds.

Wieland believes there’s unease among some recruiters about how they’re going to fit neurodiverse candidates into the mould of a law firm as they often just “put people on a set path.” She adds that other sectors are currently much better at providing creative job designs to accommodate neurodiverse talent.

To catch up, she advises that firms have one-to-one conversations with neurodiverse applicants before the interview stage about what adjustments they need to perform in the role. She also says that neurodiversity is a spectrum where candidates need to be treated as individuals.

At Browne Jacobson, Wieland is the founder of the persons with disabilities and conditions network, which started as a “handful of colleagues” but has grown into a thriving community where members feel empowered to share their stories with the wider workforce.

After Wieland completed her apprenticeship and later attended university, she gained a place on the Law Society’s Diversity Access Scheme that helps less economically privileged candidates pursue a legal career. Like her apprenticeship, she says the scheme helped her develop her soft skills, which would help her in her future legal career, including networking and collaborating with mentors.

However, sector-specific work experience was the most valuable gift the scheme gave her; “that was one of the key barriers I was coming across,” she says. “I could sit in a courtroom, but I wasn’t able to get through the door of a law firm and gain that experience.”

Today, Wieland is giving back to ensure students like herself can make their dreams of a legal career a reality even if they don’t have the financial means to pay for the relevant courses or the connections for industry-specific work experience. “I’m an alumna of the scheme and recently led a mentoring workshop and sat on the interview panel and reviewed applications,” she says.

The conversation closes with words of encouragement from Wieland for budding lawyers from diverse social backgrounds that their work experience is relevant, whatever it might be.

“The biggest barrier to getting into the profession for individuals from low socio-economic backgrounds or other underrepresented groups is not knowing how to stage their experience because it’s different to someone with the connections to have sector-related work experience,” she says.

“Just because you worked in Asda doesn’t mean that your experience is any less valuable. In fact, it probably is more valuable because you probably had to learn those customer service skills that if you were just in a law firm being mentored by someone, you wouldn’t necessarily get. So, it’s about making that translatable and making people realise that it’s actually valuable.”