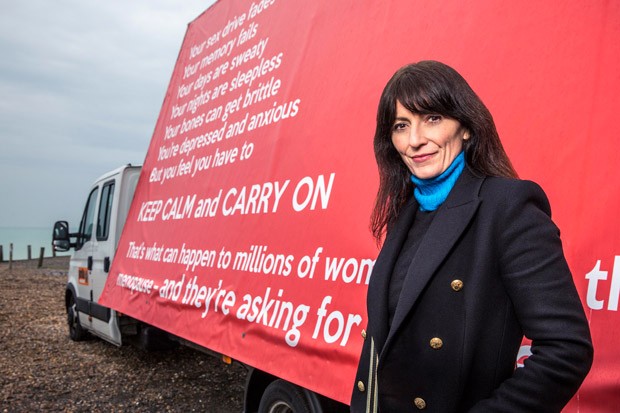 McCall (pictured) took part in a Channel 4 documentary on the menopause. Source: RadioTimes.com

TV presenter Davina McCall has lent her support to industry charity the Retail Trust and their campaign to urge retail employers to better support menopausal and perimenopausal women.

McCall, who took part in a Channel 4 documentary called ‘Sex, Myths and The Menopause’, is set to appear at the free Retail Trust event this November, where she will “call on retailers to tackle the taboo and create a more open workplace culture.” She will be interviewed by best-selling author and former Sunday Times Style, Cosmopolitan, and Elle editor Lorraine Candy.

The Retail Trust Leaders’ Summit, set to take place in London on November 9, aims to improve staff wellbeing. Over 100 leaders from across the industry are expected to attend and address a range of issues, including improving mental health, diversity and inclusion, and retaining talent.

Employers across all sectors would benefit from better education on the menopause and its impact on female staff, particularly that menopausal women are the fastest-growing work demographic in the UK.

Various studies have pointed to the risks of ignoring menopause and how it affects female workers, including possible staff turnover and impacted workplace productivity.

According to The Menopause Survey 2018, a joint project conducted by researchers at the Police Federation of England and Wales (PFEW) on behalf of PFEW, UNISON, the Police Superintendents’ Association, and the British Transport Police Federation, 76% of respondents felt their symptoms had been problematic in the workplace.

The same study found that 20% said they had considered quitting their job as a result of their symptoms, rising to 44% of those experiencing the most severe symptoms.

The 2018 Scottish Trades Union Congress (STUC) Women’s Committee survey found that 32% of respondents felt the menopause was treated negatively at work, and 63% said it was treated as a joke.

A third study, a 2019 survey by Dr Louise Newson and Dr Rebecca Lewis of the Newson Health and Wellbeing Centre, found that over three-quarters of women reported that their employers offered no information or support around the menopause.

Davina McCall said: “There’s still a taboo in talking about menopause and perimenopause in the workplace, and this has to change. We need to make it normal and unremarkable for people to discuss it at work, which is why it’s great that the Retail Trust is putting menopause on its agenda. For retailers that really care about their employees’ wellbeing, creating an open and supportive culture around menopause is a great start in helping to tackle it.”

Chris Brook-Carter, Chief Executive of the Retail Trust, said: “Retail workers everywhere have suffered many consequences of the pandemic and the future success of the industry now rests heavily on the hope, health, and happiness of its workforce. We’re running this event because we want retail employers to ask themselves whether they are really doing enough to support mental health, ensure inclusivity, and build rewarding careers. The menopause is something that they can no longer ignore as part of this.

“Women make up a large proportion of the British retail sector, so the industry already has a real responsibility to step up and support those experiencing the perimenopause and menopause, many of whom will be at the peak of their careers and under other pressures. But every single one of us needs to know and talk about the menopause, and Davina is absolutely right that the support starts with creating more open conversations at work that will help us all to tackle this taboo.”

Businesses can register now to attend the free one-day event on November 9 at Andaz London Hotel.