Digital divides in the workplace 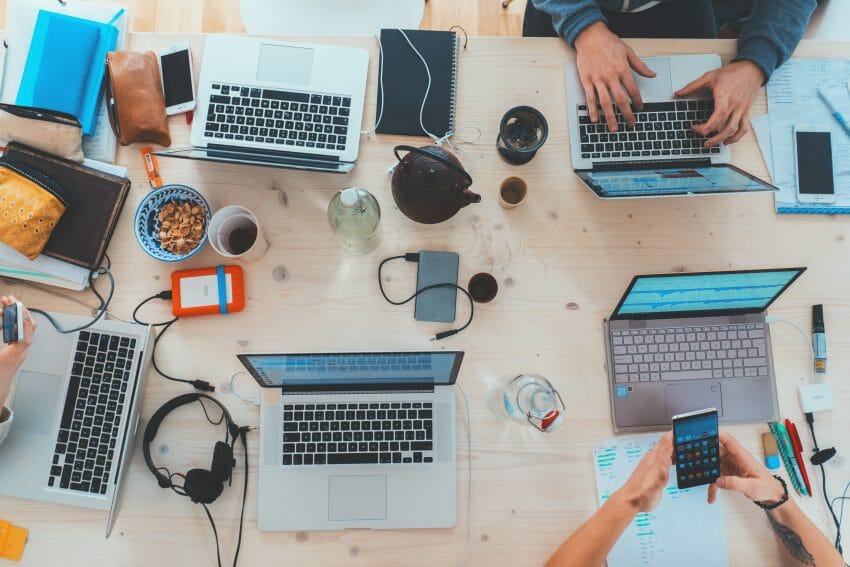 In this weeks column, Julia Rampen considers the digital divides in the workplace and apps like Slack that are creating virtual offices – but not everyone’s invited

“You look nice today.” “Sometimes you eat the bear, and sometimes the bear, well, he eats you.” If this combination of comments sounds instantly familiar, you’re probably one of the eight million people who use Slack on a daily basis. And if you remain confused by this paragraph, then you’re locked outside the virtual door.

A new technology is creating offices within offices. For some workers, it means liberation – if you already talk to your boss through instant messages, will she even notice if you’re working from home? For others, though, it could be the start of a growing isolation. Just as word processors, email and mobile phones empowered some and nonplussed others, the rise of internal communication apps risks alienating a significant section of the workforce and creating digital divides at the office.

Slack is perhaps the best-known example of this new technology, which is all the more staggering given it’s less than six years old. It was created in 2012 when Stewart Butterfield was working on a game that turned out to be a failure. He and his team agreed that they wouldn’t try another unless they had a good internal communications system.

In Slack, you can set up a “team” as easily as setting up an email, and then invite your colleagues to join it. Information can be shared on different “channels” listed, such as “Announcements”, “Projects”, and “Office chat” (there are dedicated articles on how exactly to name them) (think “Meet our new team member” in “Announcements” and “The sandwich shop downstairs is half-price” in “Office chat”). Other examples of workflow technology include Trello, which visualises different stages of a process as individually named boards, on which workers can pin their latest project and invite others to collaborate, and Teams, a Microsoft product.

If Slack was simply another tedious box to tick, along with filling in expenses forms and holiday paperwork, it might not have much impact on how the office thinks or interacts. But Slack has its own social culture. Emojis are part of day-to-day communication. Procrastinators have discovered how to programme the “Slackbot”, an automated response, to make humorous replies to specific phrases. There are Slack industry networking groups – some even charge membership fees. Nor is office romance dead – a dating app has produced a version specifically for Slack, which allows you to enter the name of an attractive colleague and see if they feel the same way.

Ironically, it is this informal popularity that makes Slack a risk to inclusivity in the workplace and has the potential to put up digital divides. Dr Ricardo Twumasi, a lecturer in organisational psychology at the University of Manchester, notes that many technologies enter the workforce because “one group decides to use them” – and that group may not be representative of the workforce at large. Anecdotally, I’ve heard of many offices where an internal communications system is almost a submarine presence, a key part of daily life for millennial employees of which their older colleagues are blissfully unaware.

This, in turn, could lead to more age discrimination. “If you have a large working team, in that you will have smaller groups that tend to coalesce and they tend to be people with similar interests,” says Dr Twumasi. “The group that goes to the pub after work, or the people who have children.” For millennials, who make and maintain friendships through instant messages, internal communications platforms are just as much the water cooler as the boardroom. It’s easy to imagine a thriving but silent social world of internal communications that entrenches age segregation and digital divides.

If this does happen, though, employers will bear responsibility. Because let’s be clear: Slack, Trello and most modern apps are not hard to use, they’re just intimidating. This is in part because tech companies themselves target young people in their marketing campaigns: Facebook famously began as a network for university students and was only later opened up to the population at large. It’s easy to forget that even email was once alien enough to inspire whole academic studies, including the distinction between “experienced” email users and “novices”. Today, eight in ten Brits use email regularly.

Stereotypes and technology use

Indeed, despite being neglected by marketers, older demographics have adopted Facebook, Twitter and WhatsApp. They are also more comfortable with being online. In 2011, according to the Office for National Statistics, just half of those aged 65 to 74 recently used the internet. Today, more than three-quarters do. When interviewing older workers, Dr Twumasi found that many were frustrated with the stereotype of being a Luddite:

There were older workers who learned to programme or grew up with the first personal computer.

Chris Brooks, a policy manager at Age UK, agrees. Employers should be careful, he warns, that when rolling out new technology, they do not engage in discriminatory behaviour.

Managers can ditch this stereotype in a practical way – by taking the initiative and assigning every worker to an internal communications system, in the same way, they provide company emails. Leading the rollout of internal communications also gives employers control over the questions that come with it, like the work-life balance: and productivity. Millennial magazines are full of articles lamenting the way that push notifications – the alerts send by email providers, social media platforms, and yes, Slack – are turning them into workaholics and procrastinators at the same time. It’s intriguing to compare these complaints with the findings of those 1990s investigations. “Email messages do have some disruptive effect by interrupting the user, probably more than is generally assumed,” researchers from Loughborough University noted – something of an understatement in the years to follow.

Employers should also recognise that different age groups may need to be trained differently. “Older workers often like to learn in different ways,” Brooks from Age UK tells me. “The organisations might need to actually talk to people and ask what the best way to transition to a new technology is. Older workers often like to take a bit longer to learn things.” He cites the example of businesses that run two different induction courses, one short and concise, and one spread over several weeks, with new starters able to choose the option that suits them best.

Slack itself may be part of the solution to digital divides. “When you have more diverse working teams you tend to reduce the number of stereotypes held within these groups,” says Dr Twumasi. If employers use internal communications platforms to create new teams, that are more demographically diverse, employees are more likely to teach each other skills, including how to approach new technology. As the Slack quote goes: “We’re all in this together.”