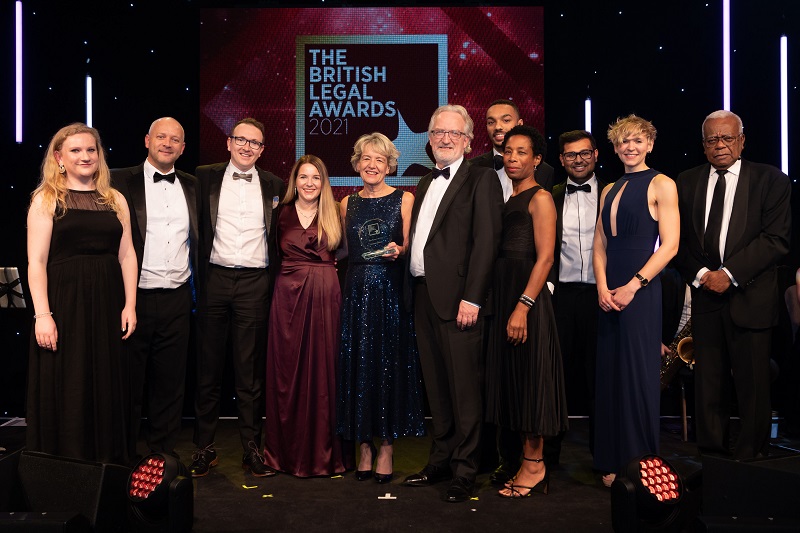 Law firms are not generally known for embracing diversity, equity and inclusion (DEI) and social mobility but are more widely perceived as the preserve of those from privileged, white, Oxbridge-educated backgrounds. The Law Society underlined this last year by calling for more to encourage social mobility in the profession.

One firm that doesn’t need to heed the call is Browne Jacobson. It has long been a leading light in creating an equitable and inclusive environment that welcomes people from all backgrounds.

According to Senior Partner Caroline Green, who’s been with the firm since 1984, background not being an issue is in Browne Jacobson’s DNA. “We’ve always had a lot of people who’ve been first-generation university graduates or from lower socio-economic backgrounds,” she says.

This commitment, plus a range of initiatives, has brought trophy-cabinet-filling recognition. In 2021 Browne Jacobson won: D&I Initiative of the Year at the British Legal Awards; Innovation in Diversity & Inclusion at the FT Innovative Lawyer Awards; Innovation Award at the 5th annual UK Social Mobility Awards Diversity and Inclusion Award at The Lawyer Awards. The law firm was also rated UK’s number one employer on the Social Mobility Foundation’s social mobility index.

One of the firm’s initiatives was removing identifiers from CVs, including names, university degrees and A level results, and focusing on ‘contextualised recruitment’. This involves looking at what would be the expected results from individual schools.

“For example, a lot of law firms will take students with a minimum of two As and a B at A level,” Green explains. “But, with contextualised recruitment, you look at a school and find that three Ds might be the expected results because of the catchment area. If someone gets a C and two Ds, they’ve outperformed expectations.

“As a result, we saw a marked difference from having 7% Black and Asian students to 45% in five years. I’m not for a moment equating social mobility with race and ethnicity. But it has made an immediate impact by putting everybody on a level playing field.

“When we looked at removing details from CVs, we surveyed what degrees people had and what their results were. Many of our brightest people had not got the qualifications you would expect them to hold, given how good they were as lawyers.”

Green actively promoted diversity, equity, and inclusion when standing for election as a partner in 2019. Her message was the desire for everyone in the organisation to thrive and succeed. She also launched a Be Kind initiative which encouraged people to treat others as they wished to be treated.

While the senior leadership team embraced and supported DEI at the firm, they recognised that they needed professional help to progress further. Enter Oliver Holmes, appointed Head of Diversity & Inclusion at the beginning of 2021.

He says: “The legal sector isn’t well known for embracing DEI, which was why I was hesitant about coming here. But the leadership team is phenomenal. I don’t have to go knocking on doors. It’s all come together holistically and by design, and credit should be given for that. As a result, we have become more and more intentional in our sphere of influence and how we use our position to leverage the power of diversity.”

Green and the firm’s Managing Partner Richard Medd conduct reviews of the most senior partners – involving an open question about what they have done to advance diversity, equity and inclusion. Conscious inclusion and anti-racism training are mandatory for the leadership team. There’s also an expectations framework that includes DEI for partners and legal directors.

Last autumn, Green and Holmes took part in a roadshow, visiting the firm’s five offices around the country, hosting sessions on DEI. During Inclusion Week, employees made pledges about how they would help to advance DEI. Another initiative, ‘Courageous Conversations’, enables people to talk openly and share experiences on issues such as menopause and disability.

During Disability Inclusion Month, staff wore purple, and a group of employees arranged for one of the towers at the Nottingham building to light up in purple.

“What’s really encouraging to see is the pivot and thinking around social mobility,” says Holmes. “People don’t just see it as a nice thing to do but are truly seeing the advantage of bringing in different people, with different skill sets and lived experiences.”

Green is keen to work with the Social Mobility Foundation to share the firm’s story more widely. In particular, how Browne Jacobson has achieved all it has through dedication and commitment, rather than spending large amounts of money. Green believes that not being on the Social Mobility index is a missed opportunity for many legal firms.

Diversity & Inclusion to be the norm

She points out: “Increasingly, clients are expecting to see change around diversity, equity and inclusion.”

However, DEI has to be done for the right reasons. Holmes explains: “There has to be a sense of belonging. We’re working hard to make sure that people thrive and succeed. If you don’t focus on that, you won’t have a diverse workforce, and you’ll end up with more people leaving than joining.

“The fun aspect, and how it can make people feel great, is what is sometimes missing from diversity, equity and inclusion. We should be creating cultures where people can be kind to each other and come to work and have a great experience.”

For Holmes, true inclusion is represented by the water cooler conversations where people feel comfortable talking about things, such as menopause symptoms. Other good examples are where the facilitator invites people who haven’t spoken in meetings to have their say and contribute.

When asked about the potential for DEI fatigue, Holmes says candidly: “I would love to live in a world where I was redundant from a role like this. But there are societal challenges that we still have to focus on. People are people first and foremost, and they have different lived experiences told through lots of different lenses. When there are big issues at hand, you want to ensure they get the attention they deserve. So, I’m still in favour of affinity groups and employee resource groups to help drive education and awareness.”

For organisations struggling to embrace DEI and social mobility, he advises having a clear vision of what they want to achieve and not being confined by clunky processes that would slow progress.

Green agrees, adding: “Don’t think that the solution is necessarily throwing money at something because, with passion and commitment, you can achieve such a lot. You need to listen to your people. If you don’t, and just say from on high, ‘this is what we’re going to do’, you won’t bring people with you and create the inclusive culture that is so critical.”