Who runs the world? Girls – almost as female leaders in politics rise 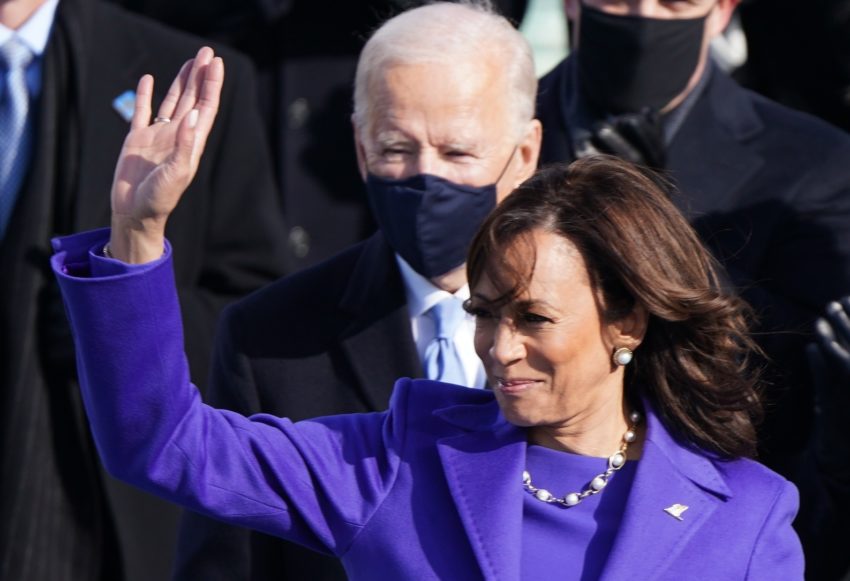 Kamala Harris waves after she was sworn in as U.S. Vice President during the inauguration of Joe Biden as the 46th President of the United States on the West Front of the U.S. Capitol in Washington, U.S., January 20, 2021. REUTERS/Kevin Lamarque

Whether the VP, President, or PM, female leaders in politics posses an unfathomable strength of character, from which corporations can learn

The burden of responsibility confronting the 46th president far outweighs those of his predecessors in their sheer magnitude.

His task at hand to: “soothe gaping social divisions, repair the American republic, and restore its moral reputation,” may require more than his fundamental decency as he strives to “be a president for all Americans”.

But he has made a start. And he is not alone.

In Kamala Devi Harris, and as Madam Vice President, he has stood shoulder-to-shoulder with him a formidable woman.

Now the highest-ranking woman in the history of American politics, Harris is a female trailblazer who has been breaking barriers throughout her career.

Her accomplishments can be traced back in part to her upbringing, her education and a piece of life-shaping advice offered by her mother: “don’t sit around and complain about things, Kamala. Do something.”

Harris is no stranger to smashing glass ceilings; neither is she unafraid of making controversial decisions – some of which have seen her criticised by the communities she has served.

But it is a certain strength of character that uniquely places her in good stead as ‘second in command’ of the world’s largest superpower. Character traits that may also account for this decade’s groundswell of female leaders in politics.

Empathetic, focused, determined, passionate, inclusive – simply different; Harris and many other female leaders in politics have that intangible mix of ‘something’ that is hard to describe and difficult to emulate by many men.

Harris is smart, effective, knows how to ask tough and the right questions. She knows how to build bridges and heal communities. Those close to her call her kind.

Harris herself says she wants to be the type of leader that “checks her ego” and work as a team with others to tackle the coronavirus, embattled economy, and divisions within the United States.

Harris does not have a monopoly on how excellent female leaders in politics should behave.

Until early 2019, New Zealand’s Prime Minister, Jacinda Ardern, had avoided international spotlight and scrutiny. However, everything changed on March 15, when a far-right white supremacist strode into two mosques and murdered 50 Muslim worshippers in the most horrific massacre the Island had ever witnessed.

An incident, even the most experienced communications expert, would struggle to spin into positive PR. But somehow, one of the youngest female Prime Ministers in the world was able to do it. Not only did she manage to calm down a local community stricken with grief and placate an international community sickened with shock, but she also succeeded in turning a story fueled with hate into one of love.

How? Through clear, consistent communication and messaging – reinforced with action. Ardern also placated the targeted community by embracing it.

A female approach to crisis management

In the second quarter of 2020, we saw global recognition for female leaders in their handling of the pandemic, with the likes of Angela Merkel and Jacinda Ardern highlighted for their success in combating the COVID-19 crisis.

Let us not forget the notable actions of Iceland’s Prime Minister Katrin Jakobsdottir, who has made gender equality a priority for her team’s entirety in government. Iceland also has one of the lowest COVID-19 death rates per capita.

Barbados’ Mia Mottley has lived a public life of firsts – first female leader of the Barbados Labour Party and the Opposition; first female Attorney General; and youngest ever Queen’s Counsel in Barbados.

As Minister, she co-authored the White Paper on Education titled “Each Child Matters” and helped create the Education Sector Enhancement Programme, popularly known as Edutech.

Mottley has called for a new international economic order to address deepening inequality within and between countries, and to tackle the climate emergency. She is a supporter of women-led social and economic recovery initiative Rise For All alongside female leaders worldwide.

As of January 6 2021, Barbados has had just seven COVID-19 related deaths due to Mottley’s fast-acting lockdown measures.

Females in leadership work. But, with women making up less than 24% of global leadership teams, there is a clear case for more action to bolster women in leadership in corporate America. If a woman can run a country, why not a Fortune 500?

Women have an advantage in leadership as they possess many of the requisite traits to be an excellent leader: limitless inner strength, natural instincts, and wisdom.

Women also possess high emotional intelligence, which connects them to the needs, concerns and hopes of their communities and the people they lead, making women adept to resilience and leading in a crisis.

The most effective decisions are made based on a range of experiences and diverse thinking styles; leadership requires a collective effort. It is a philosophy many women (and men) in leadership positions promote: to empathise and listen, not demand or decree from on high. Female CEOs are also more driven by the purpose, mission and culture of an organisation than personal achievements.

Multiple areas still impede women’s progress in Corporate America: the lack of sponsors, mentors, allies, clear development pathways, to name a few. And in terms of harnessing and celebrating the superpowers of women in business, we are by no means there yet.

Who runs the world? Girls? Maybe, one day – with the collaboration of more open-minded men like President Biden in the world.