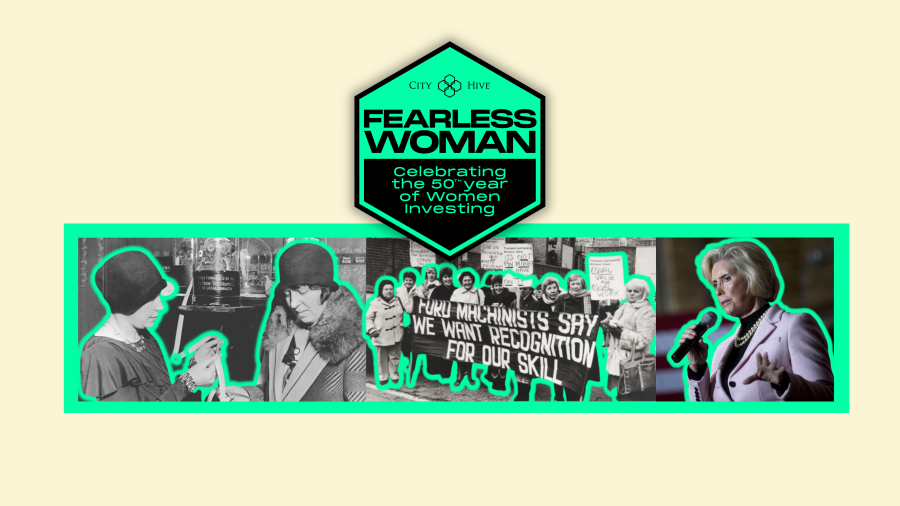 From the 19th century onwards, women began to protest and highlight the growing inequality they faced.

DiversityQ, ESG Clarity and What Investment support City Hive’s Fearless Woman campaign, celebrating 50 years of women investing in the UK. In Part II of our timeline of women’s financial rights throughout history, we look at how activism helped women challenge the status quo and start to lobby for improving their rights.

Our first article in the series looked at how women’s financial rights declined through the Middle Ages, with the introduction of coverture.

However, from the 19th century onwards, women began to protest and highlight the growing inequality they faced when it came to their rights. Here is how they fought to change things.

The beginning of the end for coverture

The 19th century US breakthroughs

With the declaration of independence seeing the US sever their political ties with Britain in 1776, the individual states began to bring in their laws. While this didn’t immediately represent equal financial rights for women, there were some changes.

In 1839, Mississippi became the first state to allow women to own property in their name, while married women in Maine were granted separate economy, and the right to be seen as independent from their spouses in 1844.

In 1848, the landmark Married Women’s Property Act was passed in New York and later used as a template for other states to pass similar laws over the following 50 years. The Act was divided into three sections, with the first giving married women control over any property they had brought into the marriage.

The second section put personal property a woman had acquired throughout the marriage also under her control, though this could be taken to pay off her husband’s debts. The third and final section allowed gifts and inheritances given to a married woman by anyone other than her husband to also remain under her control. This, like property acquired before the marriage, could not be taken to settle any of her husband’s debts. While the Act did not offer married women complete control over their finances, or equal financial rights, it did allow more economic freedom. For the first time in centuries, married women could be treated as individuals.

In 1880, Mary Gage opened the first stock exchange for women, allowing women to speculate on railway stocks. Women had only been able to invest through expensive middlemen previously but were generally discouraged from getting too involved in the stock market, especially as they were seen as too delicate to handle the fluctuations of the investment world.

While British women were still living under the law of coverture, in 1868, the Married Women’s Property Bill, proposing a change, was introduced to Parliament. Following two years of amendments, the Bill became law in 1870. The law permitted married women to hold on to their wages and investments separate from their husbands, inherit small amounts of money, and hold property inherited from close family members. However, women were still a long way from enjoying financial independence, as most of their finances and property could still be controlled by their husbands. The Act also only applied to new marriages, so those married before 1870 were unable to enjoy the benefits of the new law.

With Women’s Rights activists demanding better, the Government introduced the Married Women’s Property Act of 1882, allowing women to buy, sell and own property, and keep any income earned from property or occupation. With the passing of the 1882 Act, the British system finally waved goodbye to the restriction of coverture and the belief that women belonged to their husbands.

The 20th-century shift to equality

The bumps in the road in the move towards gender equality:

In 1903, Maggie Lena Walker was the first woman to open a chartered bank in the US. However, while Maggie could open a bank, she could not actually open a personal bank account without a man’s help and consent. This was a right that women would not be granted for several decades. In Oregon, a law was passed in 1908 limiting women’s working days to 10 hours, arguing that they were also required to fulfil their duties in the home. Meanwhile, the female-only First Women’s Bank of Tennessee opened in 1919. Ironically, while all customers, employees and directors were women, all shareholders were male.

How equal pay was Made in Dagenham

The Dagenham Ford Factory first opened in 1929 and was the biggest in Europe, offering well-paid jobs to 30,000 workers. In 1968, after a pay regrade saw sewing machinists classed as ‘unskilled’ labour, 187 machinists, all women, went on strike and demanded they be reclassified as skilled labourers – the same as men performing similar roles. The strike publicised by the 2010 film Made in Dagenham brought the factory to a complete standstill.

After four weeks, the machinists were offered 92% of their male counterpart’s pay grade rate, and they returned to work. They would not find themselves reclassified until 1984 and a further strike.

Inspired by the strike, female trade unionists came together to create the National Joint Action Campaign Committee for Women’s Equal Rights. In 1969 1,000 protestors took part in an equal pay demonstration in Trafalgar Square organised by the committee. This, combined with the outcome of the Ford strike, led to the Equal Pay Act of 1970. Despite the equal pay legislation, women in the UK could still not open a bank account in their name until 1975. While gaining equal pay in 1963, women in the US could find themselves refused a credit card in their own name until 1974.

Lilly Ledbetter was one of the only female supervisors at an Alabama based Goodyear plant with two decades worth of experience. She had faced significant sexual harassment and questions about whether a woman belonged at the plant. One day, she received an anonymous note telling her the salaries of three male managers and revealing that they were all earning more than her. She filed a complaint and took her case to trial, where she was awarded back pay along with $3.3m compensation and damages. However, Lilly’s battle was far from over.

The Court of Appeals reversed the jury’s verdict, and in 2007 The Supreme Court went on to rule that women had to sue for discriminatory pay as soon as it occurs and cannot bring a lawsuit for pay discrimination if 180 days or more have passed, even if the employee continues to receive discriminatory paychecks. The decision angered many within Congress and the administration, with Judge Ruth Bader Ginsburg leading the call for change. Two years later, under the Obama administration, the Lilly Ledbetter Fair Pay Restoration Act was signed, allowing individuals to sue companies for pay discrimination even if more than six months have passed.

With gender, pay, investing, and pension gaps still prevailing, not to mention gender representation gaps within the investment industry, it can often feel like we have an uphill struggle to reach gender parity across the board. However, as we view how our rights have evolved, ebbed, and flowed over time, it’s clear to see that genuine, impactful change is possible.