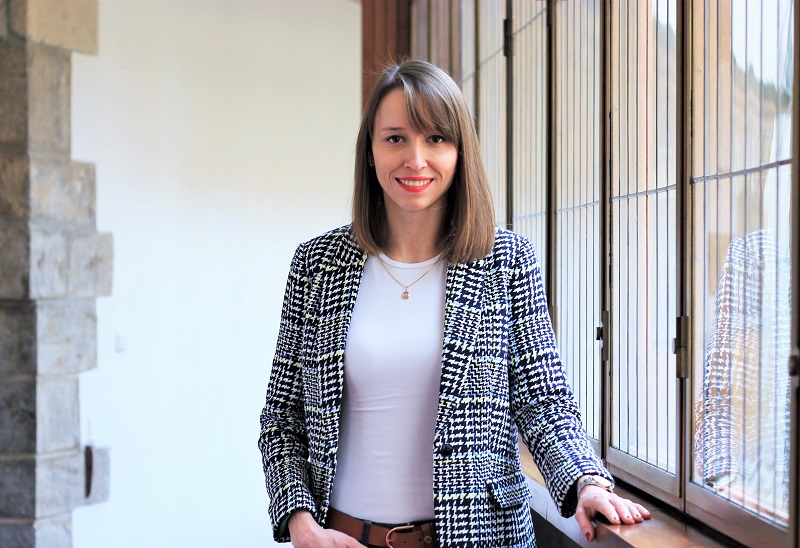 Dr Lucie Kadlecová at CybExer is working on change the narrative

Diversity within teams leading to more creativity and better outcomes has become increasingly acknowledged in the workplace. But cybersecurity and IT generally lag in attracting and recruiting women. Dr Lucie Kadlecová discusses ways of overcoming the problem.

At the beginning of every semester for the cybersecurity course that she teaches at Charles University in Prague, Dr Lucie Kadlecová will receive an email from a female student questioning whether she should join.

“I always tell them to give it a shot,” she says. “That they don’t need to have any prior technical knowledge and that there’s no reason to think that they’d do worse than their male colleagues. I also tell them to talk to other girls who are thinking of joining and women already in the field.”

Kadlecová is an academic expert in international relations and international law in cyberspace and is Senior Associate, Strategy and Threat Intelligence at CybExer Technologies.

Last year the company supported an initiative called ‘Cyber Battle of Estonia’ run by the Estonian company CTF Tech. The support was in the form of CybExer’s proprietary cyber range used for the competition. It aimed to encourage teenagers into the cybersecurity sector. Participants were taught the basics at a series of bootcamps before entering the competition stage. They demonstrated their newly learned skills in simulated scenarios, with the final shown on TV.

“There were 500 applicants, and 30% were girls, which was an amazing number,” says Kadlecová. “Unfortunately, CTF Tech then saw so many girls drop out as soon as it got into the competitive rounds. That has led them to take a different approach this year, focusing on the softer aspects to improve girls’ self-confidence before joining competitive matches.

“Fingers crossed that this will be successful because the previous year of Cyber Battle of Estonia showed girls are interested in joining the cybersecurity field. They just need more support to do that. I would like to see other countries create similar bootcamps and competitions because it gives a boost to girls at a very crucial moment of their education.”

In fact, CTF Tech has since announced that it plans to take the Cyber Battle series to other countries.

Kadlecová’s commitment to supporting and motivating women to join the cybersecurity sector stems from her experience in making the most of educational opportunities.

Born in former Czechoslovakia before the Velvet Revolution, she grew up in the post-communist “wild 90s”. She recalls: “I realised that I had a unique opportunity to take advantage of an education that my parents and grandparents couldn’t take. That is why I decided to challenge myself to harder education and new fields.”

After graduating from Charles University with a degree in international area studies, Kadlecová took a Master’s in war studies at King’s College in London. Here, she learned about cybersecurity from a social and non-technical point of view.

Next stop was Brussels and an internship at the Cabinet of the Commissioner for Enlargement and European Neighbourhood Policy, focusing on Eastern Europe and Russia. She was a trainee in NATO’s cyber defence section and worked as a cybersecurity/policy specialist in the National Cyber Security Centre of the Czech Republic. She recently completed her PhD at Charles University, during which she also spent her Fulbright scholarship at the Massachusetts Institute of Technology in the USA.

One of her biggest challenges is explaining the importance of cybersecurity’s social – or non-technical – aspects. “In general, many institutions think that they are safe if they have really, really good guys in their IT department, but that’s the greatest misconception of cybersecurity,” she argues.

“Cyberspace is a man-made domain compared to other domains, such as airspace. So, we are the movers of events in cyberspace; we influence it. When we talk about non-technical aspects, it’s how we, as users behave in cyberspace.

“It involves things like social media, international relations and law; and using strategic communication to talk about how they are applied in cyberspace.

“In my academic and professional careers, I always try to underline these non-technical aspects, which we need to consider to be safe online.”

Kadlecová believes that gender should not be a barrier to working in cybersecurity and points out that more gender-balanced teams tend to come up with stronger and more feasible solutions.

“For instance, women are stronger in negotiations, have an eye for detail and are better at problem-solving, so the workflow is smoother and faster.”

But how do you attract more women into the space? Kadlecová suggests three ways of tacking it. First, challenge the misconception that cybersecurity and tech generally are a male thing. The way to overcome it was through initiatives such as the Cyber Battle of Estonia, pointing out female role models in the industry and setting up mentorship programmes.

“The second one is education, at an early stage, to show girls that technology is not scary and that they can be equally as good at it as their male friends,” she suggests. Some women are already on their career path but are unhappy with what they are doing, so we should focus on providing them with requalification courses.

“Thirdly, and probably the toughest one, is to change the societal burden – that goes beyond IT and cyber security – that one gender is better at some subjects than the other. This will not change in a couple of years. It’s a generational thing. I believe by going through those first two layers; we can hopefully reach the third layer sooner rather than later.”

Kadlecová is a perfect role model when it comes to carving a career in cybersecurity and remains enthusiastic about the work. When asked what she enjoys the most, she responds: “I like the challenges, and the prospects are countless. The sky’s the limit. I’m always learning something new. Of course, I will never know everything, but I can always improve. This is what keeps me in the field and makes everyday fun.”