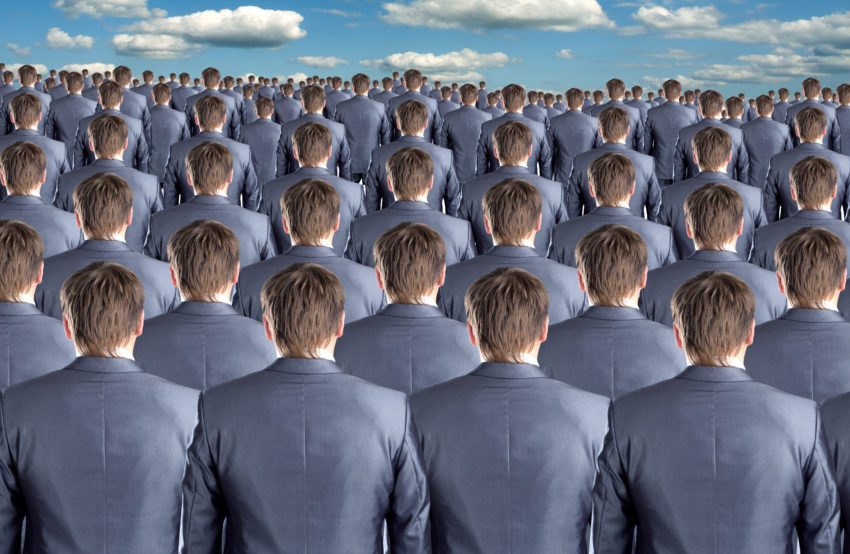 Ascomposition of the UK’s ‘identikit’ workforce comes under renewed scrutiny, Rita Chowdhry shares why current diversity approaches are failing to build a more inclusive, diverse work environment. It’s time companies ditched the Corporate Clone Syndrome and accounted for another, form of diversity: that of personality.

Hardly a day goes by without news reports of both private and public organisations being hauled over the coals about their discriminatory recruitment practices or lack of diversity, especially at boardroom level.

This is perhaps unsurprising given the wealth of research that has found the UK talent pool to be narrow in both variety and mind. Earlier this year, for instance, the Daily Telegraph reported that women are making “some inroads” but that there is “still a long way to go” for ethnic minorities who make up just 8% of FTSE 100 board me mbers.

In November, the BBC separately reported that black and minority ethnic (BAME) professionals are more than 90% less likely to land a boardroom role than their white counterparts. Yes, you read that correctly: 90%.

It is a matter of simple fact, based on numerous studies, that gender-balanced and otherwise diverse organisations outperform their more homogenous counterparts. By extension, companies that fail to embrace greater diversity – in race and ethnicity, age, gender, disabilities and personalities – suffer greatly for it in the form of stagnating, disengaged workforces and widening skill gaps.

Given the clear economic benefits at stake – and the mounting pressure from staff, government-backed think tanks and the media –  perhaps it is time to re-evaluate the current approaches to diversity. For it is plainly evident that those measures, by themselves, are not working as intended.

Having worked with numerous organisations including Spelthorne Borough Council, various UK police forces, KFC and Costa Coffee through my coaching consultancy, Savran, I have come to understand that the real reason for the lack of diversity in corporate Britain is not so black and white. Board members do not have to be misogynistic or racist to exclude women and BAME candidates from joining their ranks. Neither must they be ageist to favour older (or younger) applicants, nor dedicated gym buffs to think less of the physically disabled.

The truth is that most decision-makers discriminate without even realising it as a result of what I call ‘Corporate Clone Syndrome’. This, and this alone, is the underlying cause of almost all inequality in modern corporate Britain.

Corporate Clone Syndrome is a set of prejudicial symptoms which, in many ways, reflect the anti-diversity zeitgeist. Put simply, it explains why those in charge, as well as colleagues, may think, act and communicate in the same way, and the underlying reasons why a particular type of individual is favoured over another.

Broadly speaking, personality types under my own teaching framework fall into four categories, which we can remember using the acronym ‘DISC’: Dominant (active and task focused); Influencer (active and people focused); Steady (passive and people focused); and Compliant (passive and task focused). With the benefit of expert psychometric training, DISC helps employers to predict an individual’s natural outlook, probable responses in given situations and, most importantly, their likely performance in the real world.

The benefits of psychometric testing applies as readily to new hires as to existing staff, all the way up to board level. Where it’s not possible (or preferred) to replace bad hires, organisations familiar with the DISC personality types and my SAVVI training framework (an acronym for ‘Self-awareness, Achiever’s mindset, Values and Verbal Communication, and Inspiration’) can better understand current individuals’ strengths, weaknesses, motivators and stressors and make role or task adjustments accordingly.

Crucially, it can also ensure that the recruitment process is not unconsciously skewered in favour of certain personality types.

Abebe, a middle-aged black woman from a working-class British background applies for promotion to senior manager level in a well-known bank. Let us assume she possesses the same prerequisite skills and experience as other candidates, but be aware that she has a ‘CS’ personality type.

Despite a solid interview (with a panel of middle-aged white male board members), however, she loses out to Cuthbert, a white British man of the same age and with the same level of competence. The only distinction to Abebe, when it comes to work ethos, is that he displays a classic ‘D’ personality.

It may, on the surface, be tempting to dismiss the panel as unconsciously racist. Whilst that panel could, of course, have such unconscious biases, the more likely reason why they favoured Cuthbert over Abebe is because, like with many boards, they themselves are primarily  dominant ‘D’ types. Cuthbert was, in effect, a clone of the board members who felt more in his company than Abebe’s because he thought, acted and communicated like they did: i.e. that he projected as a goal-orientated risk-taker and natural leader.

They selected Cuthbert over Abebe because as a ‘D’ type he was driven by the same motivators that they were – achieving results and problem solving. But ‘D’ types also share the same stressors (failure and lack of control) and may overlook the consequences of their actions and the opinions of others. Consequently, Cuthbert quickly propagates the board members’ own weaknesses by attempting too much and failing to be attentive to others. This causes friction in his team and leads to heightened stress, staff churn and lower productivity.

The above example, could, of course, be flipped around. If Abebe were the ‘D’ then she would have landed the role at Cuthbert’s expense. While in this instance it may seem like a positive step to greater gender and ethnic diversity, the reality is that she would not become a facilitator to these goals but merely complicit to the continued recruitment of ‘D’ personalities thereafter. While, of course, there are female and BAME ‘D’s in society, it is a trait more commonly associated to – you guessed it – white males.

Had the board hired the non-‘D’ professional, however, the team would have benefited from their attention to detail and people skills. Stress, staff churn and lower productivity would have been far less likely.

Replicate this process with additional ‘D’ type hires, and not only at board level but across the management pyramid, and you begin to see how powerful of personality can be. In a workplace setting, Corporate Clone Syndrome explains not only the lack of cultural and gender diversity but also why some organisations are more efficient, productive and conflict-free than others.

In short, companies with high staff churn, sickness and disengagement are extremely likely to be run and staffed by a disproportionately high number of likeminded people. In effect, workforces become identikit not only in appearance but also in behaviour. Whilst a collective vision is clearly beneficial, a lack of diversity directly impacts the bottom line because the weaknesses of top-tier leaders are propagated throughout the organisation. Conversely, a true diversity of personalities can lead to more creative, innovative and robust decision-making.

Personality profiling helps to avoid such mistakes by recruiting individuals based on their DISC type and probable performance. Understanding Corporate Clone Syndrome and recognising the impact of unconscious bias is a crucial step in this process.

Let us return, then, to the basis and starting point of this article – diversity. Based on current trends, corporations are beginning to focus on visual diversity – that is, gender, ethnicity, sexuality and age – and progress will continue to be made on this front over coming years. But inclusion policies and practices will never be truly equal until Corporate Clone Syndrome is banished to the HR history books and diversity initiatives are also linked to personality types and people management.

Whilst increasing the rate of representation is certainly important, tomorrow’s corporate Britain can only thrive on the post-Brexit world stage if it accepts that profitability is not about the headcount but rather about making the heads count.