To empower female businesswomen, we need to break down the myth of the self-made entrepreneur 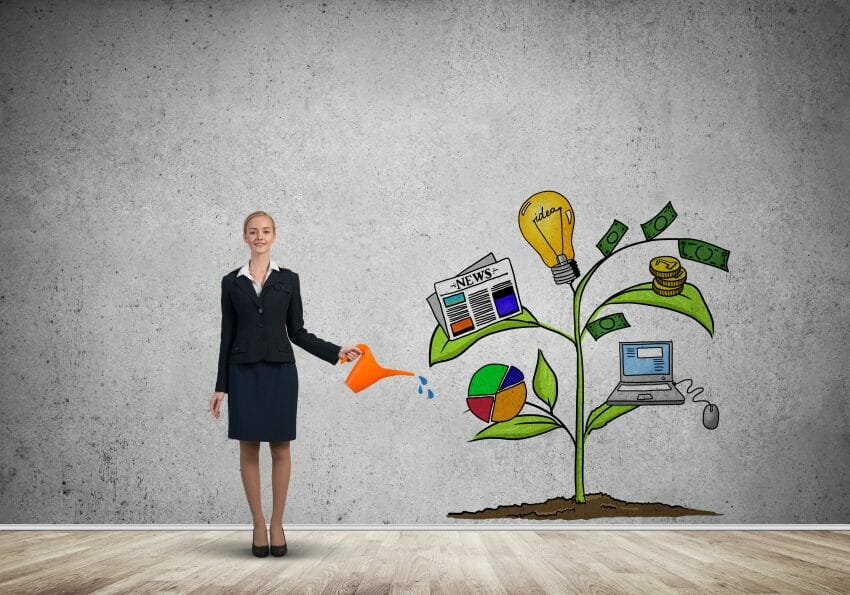 Studies suggest that investors are biased against women. Fix this, and the business landscape could change as well

You walk into a room to pitch your big idea. You’re young, have already invested your own money, and have a realistic idea of success. But when you leave the room, do the investors describe you as “promising”, or “inexperienced”? And does your sensible approach make you “level-headed” or “too cautious”?

The answer depends on your gender, according to a study of 125 conversations between venture capitalists (if you haven’t already guessed, male founders were described as “promising” and “level-headed”, while female ones were “inexperienced” and “too cautious”. Men got funding 62% of the time, compared to 48% for women. And men got more – 52% of the money they asked for, compared to just a quarter for women.

“I have seen young men eg 23-25 years old with little or no experience and with just an idea, land a £25,000 cheque or even investment of £100,000 from male investors,” Jana Hlistova, an entrepreneur on her second business, and a member of the women’s tech group Ada’s List, tells me. “This doesn’t happen for women.”

The study mentioned above took place in Sweden, where between 13% and 18% of government venture capital funding goes to women. But in the UK, start-ups founded by women receive as little as 1p in every pound of venture capital funding, according to data analysed by Pitchbook for The Telegraph. Women are half as likely to be involved in starting a business than men, according to the UK government, which has commissioned a review into the barriers they face, due to be published this spring.

The myth of the entrepreneur

The myth of the entrepreneur is the talented, scrappy individual who doesn’t have much in life but follows his or her dream and reaps the reward. But in reality, the process of becoming an entrepreneur favours those who are middle-class – and male.

First, before an entrepreneur even gets to the stage of persuading venture capitalists they “show promise” rather than “lack experience”, they need enough funds to get their idea off the ground. Research by the equity crowdfunding platform Crowdfinders found a third of entrepreneurs would use personal savings to launch their business, and 15% would use money from friends and family.

Here, women (and anyone from a deprived background) are at a disadvantage. Women working full-time earn 8.6% less than men, according to the Office for National Statistics, and that’s before considering that women are more likely to be working part-time and in low-paid sectors. Then there’s the gender wealth gap. According to the Enterprise Investment Scheme Association, women have £43,000 investable assets, without counting homes and pensions, compared to £75,000 for men.

Those women who do raise enough private funds to get to the pitching stage need to overcome other barriers – and not only the perception they are inexperienced. Even if female entrepreneurs have great insights about female customers, they first have to persuade male investors. Diversity VC, a non-profit campaign group, found that just 27% of venture capital’s labour force are women, and only 13% of those making the key investment decisions.

“Here’s an example of what women are up against,” says Hlistova. “A French, female entrepreneur was raising investment for her start-up which allowed women to rent clothing for work and special events from labels such as Prada and Gucci – a bit like Rent the Runway in the US. All the investors hearing this woman’s pitch were men and they laughed her out of the room.

“Why? Because they thought it was an ‘utterly ridiculous idea!’ Rent the Runway in the US is a very successful business.”

The power imbalance between investors and founders desperate for cash creates other issues. “Your investor wants you to come at eight in the morning – but you need to be doing a school run,” as Dhivya Venkatachalam, a female entrepreneur in cybersecurity, states the dilemma facing ‘mumtrepreneurs’. Another female entrepreneur, who works with many young female entrepreneurs says that they all were “hit on” by venture capitalists. Older women founders face the opposite problem because the VCs “don’t rate them” for their looks.

The irony is that investing in women makes financial sense. According to a 2017 report from Barclays, Untapped Unicorns, a third of male entrepreneurs have seen a business fail, compared to 23% of women, and women also bring in 20% more revenue with 50% less money invested. A 2018 study by BCG found that for every dollar invested, start-ups whose founders included women made 78 cents, compared to 31 cents for those founded solely by men.

Aga Gajownik has spent the last decade focusing on women entrepreneurs. “Most of the time there’s a real purpose – they really want to help others,” she says, citing the example of Clover Lewis, a swimwear firm designed specifically for women who have had a mastectomy. She herself recently secured £20,000 for a start-up bringing hackathons to the classroom. She wants women to be confident. “Lots of women think they haven’t done much, even though some of the things they have done is 100% more than their male counterparts,” she says. “Share things that you have done and don’t be scared of asking for money.”

Light on the VC horizon

The good news is that investors are starting to wake up to their own biases. The Female Founders forum connects female entrepreneurs and holds regular events around the UK. Ada’s List is a women’s tech community. Female Founders is an accelerator designed to mentor women with businesses with turnovers of at least £20,000 a year. Techpreneurs holds awards for women in tech. Meanwhile, the Canadian all-women investment fund SheEO recently announced it would begin considering UK female-led enterprises as well.

The investment fund Merian Ventures, which focuses on women-led tech businesses, argues that “an unintentional familiarity bias in the venture capital industry creates opportunities for investors willing to back female founders”. And indeed, the question should not be why women are not getting funded, but why investors are overlooking women. “Can you please justify why 96% of venture funding goes to men? How’s that working for us?” says Vicki Saunders, the founder of SheEO. “We need to find more women because the world needs our fresh thinking.”