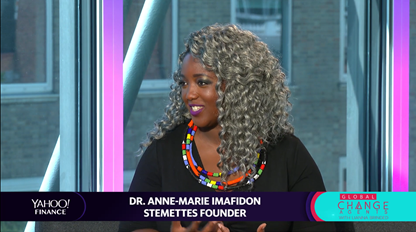 Dr Anne-Marie Imafidon, Founder of Stemettes on improving STEM take-up in young women, staring in a music video and Brexit.

Dr Anne-Marie Imafidon, Founder of Stemettes on improving STEM take-up in young women, staring in a music video and Brexit.

In the episode titled, How Anne-Marie Imafidon is inspiring a new generation of women into STEM, the child maths prodigy, and youngest girl ever to pass A-level computing at just 11, shares some of the STEMetts most inspirational success stories.

Anne-Marie, who was also one of the youngest people to be awarded a master’s degree in maths and computer science by Oxford University at just 20, shares what’s next for STEMettes, what it was like to appear in rapper Dave’s music video and to receive an MBE.

She also talks about Brexit and the difference between London and Silicon Valley.

Anne-Marie worked at Goldman Sachs, Hewlett-Packard and Deutsche Bank before launching her non-profit initiative STEMettes, which encourages young women to get involved in STEM subjects and careers.

Says Anne-Marie: “I started the STEMettes Project in 2013, interestingly as a new year’s resolution alongside my job at the time. The purpose was through acknowledging that I was in a unique position as a woman in tech, and that more could be done to create a path for other young women to take. After setting it up, it escalated much quicker than I could have anticipated and grew to a scale I wouldn’t have imagined it would be.

“In 2015, I then decided to leave the bank I was working at and take this project on full time. Since then, we have grown our team to support 40,000 girls across multiple countries. To give you a flavour of the initiatives and projects we run, I would say that we work with girls aged between 5-25 years old and set up a series of cohorts, events and content to help the people we work with.”

Within cohorts, STEMettes run a sponsorship programme for girls aged 15+ who have chosen a STEM pathway, it then matches them with a woman in industry who becomes their mentor for four months. In practice this means they work together towards a tangible goal, such as applying for internships/jobs, applying for bursaries or seeking awards. As part of the programme, the young person will have a work experience placement, where they will learn about the industry from the inside.

STEMettes has the ambition to reach half a million young women by 2025.

Historically, girls have been less engaged in STEM subjects, due to deep-rooted beliefs that the subjects and career paths are just for boys.

Says Anne-Marie: “I’ve launched a new podcast series called ‘Women Tech Charge’ which explores this. Even if you didn’t have a good teacher who inspired you, everyone has an interest or knows problems that could be solved which can help increase interest in STEM subjects. It’s not necessarily about the subjects themselves, but about identifying a problem they want to solve and then asking if they can apply technology to solve it.”

Britain as a global tech hub

Anne-Marie believes that the main difference between London and other global tech hubs (such as Silicon Valley) is that London is a melting pot for everything.

She says: “Whereas in the valley they have just tech, in London you have everything. It’s this melting pot and multi-disciplinary approach that adds to our offering.

“There are also many things, such as speaking English and being in Europe, which has helped London to become a destination where people and businesses want to come together with limited friction. That’s what we’ve always had going for us, and that anyone can come here and feel at home means that London is truly open for business.

“What is frustrating is that our goal is to reach half a million young girls in the next few years and if you travel just an hour outside the city centre you can find areas that are completely disconnected. Even though people speak the same language, are in the same time zone and use the same currency, we do not see an overspill of the benefits of this hub to all areas of the community.

“There are certain areas that lack the infrastructure, digital skillset and investment and we need to ensure the benefits are being dispersed. London has a long way to go if it is to share the benefits of being a tech hub and will be even stronger and more interconnected with the benefits of the surrounding towns and villages.

“Brexit does worry me to a point, but I’m an optimist and try to stay positive on things. In my view, we are in this Brexit situation partly because everything is so London-centric. But I’m still hopeful that it won’t happen.”