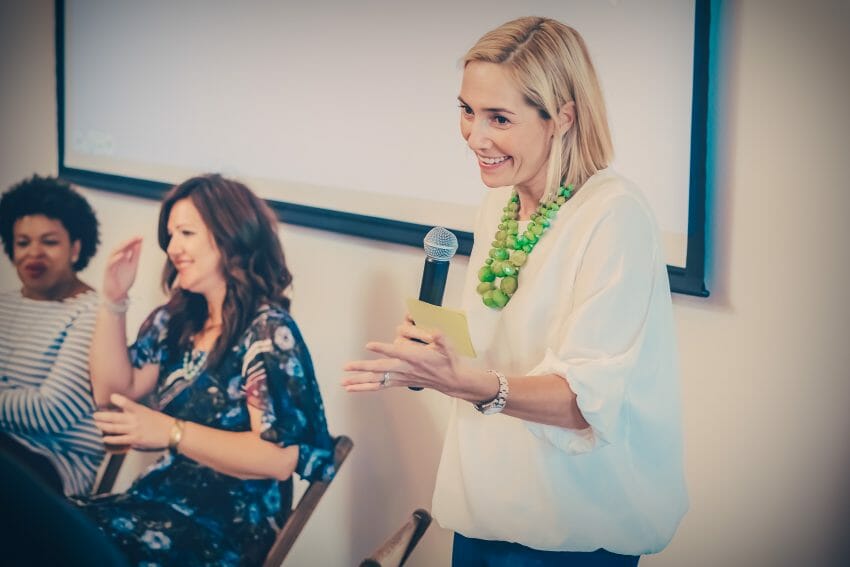 An online mentoring programme created for women by women is helping to tackle top-level gender disparity. Anna Robinson talks about the impetus for setting up Ceresa and the success of its first year.

When Anna Robinson discovered the full extent of women’s underrepresentation in executive roles, she was determined to try and level the playing field.

For her, some of the most striking statistics were that only five per cent of the Fortune 500 CEOs were women – in fact, there are more CEOs named John than there are women CEOs – and less than 20% were in senior leadership positions. What was even more alarming was that the figures had stayed the same for a generation.

“I realised that nothing had changed since I graduated 20 years ago,” she says. “I have three young daughters and I didn’t want them to face the same problems.”

Ceresa is her contribution to helping to close the leadership gap. It is a tech-enabled platform offering a radical approach to mentoring for professional women. Figures have shown that around two-thirds of women have never had access to a mentor. Also, traditional mentoring schemes tend to be more geared to helping men climb the career ladder.

“What stood out for me when I was researching the concept of mentoring was the number of women who said they’d never had a great mentor and they wondered what might have been if they had,” Anna explains. “I heard that so many times.”

Up to then, her career had followed a more traditional path. After studying at Oxford, she joined McKinsey & Co and rose to become a partner in the healthcare practice. Anna moved to the US 14 years ago, during which time she studied for a master’s degree at Stanford business school.

But she wanted something more. However, that something was difficult to pinpoint while working 70-hour weeks at McKinsey. So, she spent almost two years as COO of tech start-up Key Concierge in Austin, Texas.

“It was a great experience and my first real exposure to the technology world,” she explains. “But I had an itch to do something that was mine and not someone else’s, and more mission driven.”

The lightbulb moment came as the result of an unusual health scare. Anna developed a migraine during a morning run and which didn’t get better.

“I was taken to ER, I couldn’t move, didn’t know my own name or the year, and was rolling in and out of consciousness – and had lucid moments of thinking that was the end”

she recalls. “I was in ICU for the next 24 hours. But then, the next day, I was fine. I came out of hospital with real clarity that I should stop waiting around for whatever I was looking for to land in my lap. Women’s leadership was top of my list and so I spent six months researching and I found that the quality of mentoring and access to it was difficult for women.

“Typically, women tend to get feedback on psycho-social issues and personal style, whereas men will get feedback on their career development and how to be successful in their next promotion. From my own experience at McKinsey, while I had great sponsors who helped me to be successful, no one asked me what more I wanted to achieve with my life.”

A more structured approach to mentoring

Focusing on the key aspirations of mentees is an important part of the Ceresa programme. Unlike traditional mentoring schemes, it is much more structured. It involves what Anna describes as, “a vigorous 360-degree feedback”.

Mentees start by completing an assessment suite, followed by two months working with an executive coach to review the assessments and produce a visionary statement and specific goals, defining what they want to achieve. This will include a broader view of the person’s life issues, such as community involvement or maternity leave.

They are then matched with a mentor, based on their experience, goals and aspirations. A 90-minute introductory session is followed by eight hour-long sessions. Half way through there is a progress review with an executive coach. All sessions are carried out virtually through the Ceresa platform, although mentor and mentee can decide between them how they want to work.

The mentors are all women, while some of the coaches and advisers are men. Each mentor is given an hour’s virtual training upfront with global experts and peer mentors, along with a series of virtual on-demand training modules. They then submit a profile, setting out which areas they prefer to focus on as a mentor.

Ceresa hosts regular events on a range of topics to enable mentors to network, share experiences and boost their own knowledge. Ceresa mentors participate primarily to ensure their time giving back to the next generation is really impactful – with structure, preparation, tools and thoughtful matching helping to magnify their impact (moving them away from the awkward coffee shop meeting).

Ceresa also offers a chance to build a community with other women leaders, and further their own professional development – with sessions on topics and skills relevant to mentoring but also their broader leadership journey (recent sessions for mentors include story-telling, giving feedback to difficult bosses and visioning).

According to Anna, when women enter the workforce, their aspirations are high, with 50 per cent hoping to move into leadership roles. However, within five years, this drops drastically to just 15 per cent. The Ceresa process is designed to help women continue to work towards these goals, while navigating transitions and milestones in their careers and personal lives.

The first cohort of mentees was launched on International Women’s Day in March last year. Altogether, around 60 women went through the programme in 2018. Ceresa is named after the Roman goddess Ceres, who was associated with growth. Certainly, the roots have been well established for setting women on the road to success.

“We’ve been overwhelmed by the positive feedback,” says Anna. “People have been promoted to the next level because of the support they received from their mentors. In particular, one woman was promoted to director because the CEO had noticed a big change in her performance and that she was more confident.

“Men have also been supportive. There was a man in Austin who wanted to gift the Ceresa programme to his wife for Valentine’s Day. We’re now planning to offer the mentoring as gifts for Mother’s Day and graduation.”

The early successes have encouraged Ceresa to scale-up the programme this year while ensuring the highest standards. Companies have started to work with the organisation on a pilot basis and there has been a number of women wanting to sign up to the programme individually and financing it themselves.

“I am really proud of what we have achieved,” says Anna. “If we can make an impact on one woman at a time, we can really make a difference and help to close the female leadership gap.”

>See also: Your guide to utilising sponsorship and mentoring for diversity